Predator the Movie, by and through the Redskins

Share All sharing options for: Predator the Movie, by and through the Redskins

In case you didn't know, we've got the two stars of the film on the roster. First up is Devin Thomas, who plays Arnold's Dutch, er, enthusiastically:

Thomas is a serial abuser of the famous Arnold Schwarzenegger lines from "Predator," which Malcolm Kelly finds entirely amusing. "Do it just one time," Kelly requested today, but instead Thomas did it about 73 times. Quoting Thomas:

Via Homer McFanboy, and this should surprise no one, Chris Horton plays The Predator:

We’ve got to bring something to your attention. It seems the fans have given you a nickname …

My guess is, unlike in basketball or other sports, the fans can’t really see your face. They just see the helmet and the hair as you swoop in and make another play.

(Laughs). "It’s a good thing, I guess," he said. "The Predator, his role, he’s a deadly guy. Some of the things he did and some of the weapons he had in the movie were insane. So I guess it’s a good thing."

The helmet thing never crossed my mind, though I suppose it makes sense now (but then every helmeted football player would have a helmet related nickname, yah? Naw man, it's definitely the hair). All that is left is for Devin Thomas to lure Chris Horton into the locker room only to attempt to dispatch of him using rudimentary barbaric forest designed traps and then demand that the Predator kill him, but only if it is like right now.

But who will play Dillon (left)? 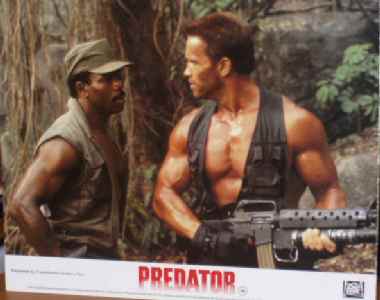 Must be Jason Taylor. You show up on my door step from a mysterious group with a checkered past (the CIA, Miami Dolphins, whatever) to aid us in a "rescue" mission? Sure, and then it becomes like totally apparent that the real reason was so you could use destroy the military camp of the NFC East. You know what? I've been used, Jason Taylor, and I like it. Your well-intentioned trickery will ultimately be vindicated when you head butt Tony Romo for a 72 yard loss despite having both your arms dislocated. Will you survive? Maybe, probably not actually, but the viewer will learn to love you.

Essay you are erratic like Antwaan Randle El. I don't really know what is up with you through most of the season, as you're too busy going generally crazy by hog-hunting or cutting your face while shaving or dropping passes. But then, right when it seems you've really lost your mind with your crazy whispers, redemption; he's right through them trees! - or defenders, as you squeeze a pass to Chris Cooley in a come from behind victory over the Eagles. I never stopped believing Mac, not after you shot out them trees. 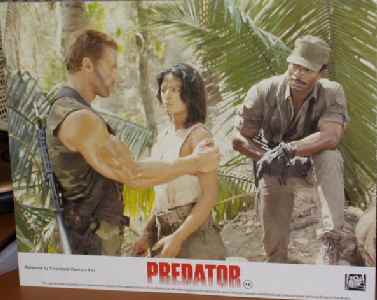 Durant Brooks you escaped the alien or else getting cut only by the skin of your teeth, and now you've got that crazy stare and absolutely surprising ability to speak fluent english of the horror (where did she learn this?). No one is more aware of their own potentialy impending doom as you. You've seen the beast, the headlines, the paper clippings, and you know best that mortality is really just one severed spinal column or botched punt away. Hey, happy ending: Anna makes it through the movie, so will you, guy. Just blame chupacabra or something. 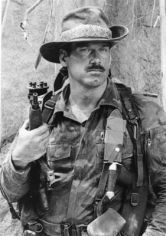 Jon Jansen. You're the seasoned veteran of the team, having survived with your own skill and ingenuity through either an unlivable firefight or 10 years with the Washington Redskins, longer than anyone else on the team. Is this 2008 Redskins trek through the Guatemalan jungle your last? Whatever the case may be, when you spray ordnance into the trees they make way like defensive linemen getting clubbed left and right. I don't care what they say about this grizzled war vet, dude still has it. 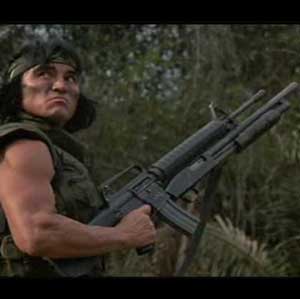 Andre Carter fears nothing, including knife fights with alien hunters who rip out the spinal columns of human beings. He would just as gladly challenge Mr. Predator to a mano-a-mano knife fight on a sliver of wooden bridge as he would challenge a double team just to buy the secondary a few valuable seconds of time. Carter doesn't talk much but, when he does, you get the sense that you better listen, because it will be profound. The only thing that distinguishes the two is that Andre Carter would win that one on one with the Pred.

Lorenzo Alexander. Versatile Poncho takes a whole lot of licking but keeps on ticking throughout the entire season. So you may have had your internal organs shattered or your helmet taken off, but Poncho Alexander keeps on coming with a mean pass rush or never letting go of your rifle (which probably killed poor Poncho, Predators don't kill unarmed prey). Safety equipment is for the weak.

Uhh, yea, Ethan Albright. Listen, someone has to snap the ball and carry all this radio equipment and it might as well be you, Red. But we really appreciate it!

Reader(s) encouraged to do their own. On a personal note, I watched this movie something like 20 times my freshman year of college, over, and over, and over again.