Hail to the Redskins!

Share All sharing options for: Hail to the Redskins! 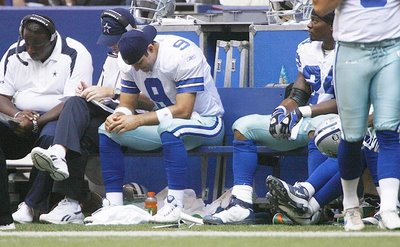 What a win! I went into this weekend thinking if we lose these two weeks to Dallas and Philly, we still have a good chance of making a wild card run. Throw that out the window. Browsing the Dallas News headlines, Jason Garrett is getting absolutely blasted by the Dallas writers, mostly about abandoning the run, a very fair criticism. Garrett claims because Dallas was trailing and the Skins stacked the box, it made them change their plan to throw:

- "There's no excuse for Barber carrying the ball three times in the second half of a close game."

- "After T.O.'s early second-half touchdown, the Cowboys didn't trail by more than six points until the final few minutes of the game. If that constitutes being too far behind to use Jones, then why even have the first-round pick on the roster?"

And here's what happened with Dallas' 12 men on the field penalty:

"I can't understand how two players playing the same position could be standing out there," Wade Phillips said, clearly flustered. "I can't fathom that. They were standing right next to each other."

Hey, Patrick Watkins: Did it seem odd to you?

"I was talking with one of my teammates, and I thought the play was set, but apparently it was changed," he gamely confessed. "It was on me."

HAHA....suckers. We all know Dallas's D was suspect, well, it's out now and Dallas reporters are firing away:

"A great defense doesn't let Moss get behind it when it's in a three-deep zone."

"A great defense isn't tied with the likes of Detroit for last place in interceptions."

"Never mind that one of the NFL's most celebrated secondaries has gone four games without an interception, and for once we can't even blame it on Roy Williams. "

The only negative thing Ahern can say about yesterday is Reed Doughtry needs to be outed. He personally screwed up that one passing touchdown running in late to cover the WR, and well, this pic says it all about his tackling abilities. 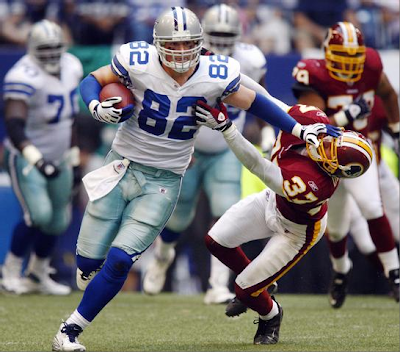