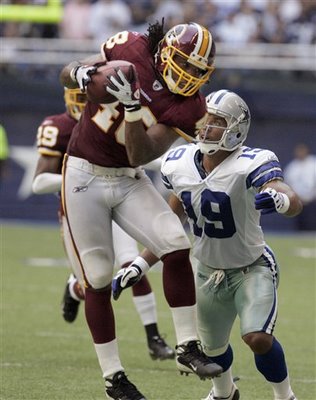 How do you keep an opponent's prolific offense from scoring on you all day long? Keep them off the field. At just about a two-to-one advantage over the Cowgirls, the Redskins' time of possession was truly the decisive stat of the game. The first down stats are misleading. In the 2 end of half drives, Dallas got almost half of their 21 first downs. Washington spread their 22 first downs a bit more expeditiously. Despite being outscored in the second half 14-9, the Redskins rode Clinton Portis to some huge first downs that kept the clock ticking in their favor and kept the Cowgirls' offense on the sidelines.
It was a win to feel good about for all the reasons you would expect to feel good after beating the Cowboys:
-in their house
-they were undefeated
-they thought they were unbeatable
-Jerry Jones was on the sidelines EARLY (and got a firsthand account of that ass-whooping)
-all those egos, all those personalities, all those prima donnas....SUCK IT!

But this win was missing something many recent wins in recent years have had...that sick feeling in your stomach after the last whistle blew. You know the feeling--an opponent's kicker misses a game-tying or even game-winning field goal; a penalty adds time onto the end of the game and we kick a game-winning field goal; an overtime win against a team that would go on to win ONE game all season over the Ravens, etc. etc. The last few seasons have given us some great wins, but Joe Gibbs liked to play them close. It allowed for a lot of things to happen in the last 30 seconds of any given game, and it allowed for it to go either way. I have walked out of FedEx so many times over the last few years with that feeling that I just got away with something...like when the Wizards traded Kwame Brown to the Lakers for Caron Butler. Or when Adam Duritz got both Courtney Cox AND Jennifer Aniston. 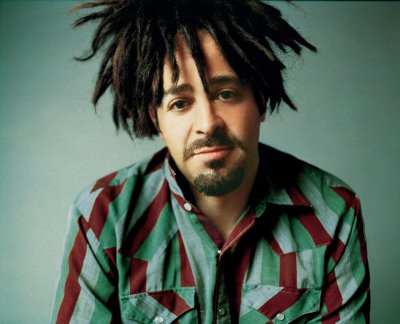 This win had none of that. From the outset, it was clear the Redskins belonged in that game (a fact disputed by gamblers the world over, as evidenced by the ridiculous line), and it was clear the Redskins beat their opponent. It got tight at the end, which is merely proof that we weren't playing a bunch of pushovers, but the score was not indicative of what occurred from beginning to end. If you didn't watch the whole game, you wouldn't know that, so don't say it could have gone either way because you watched a few plays or you saw the Cowgirls' first drive of the second half.

It was all the things we did right that kept the Cowgirls' offense grounded. And it was because of our success at grounding their offense, that they abandoned the ground game. And that will set us up nicely for this week in Philly. We know they like to throw the ball, and Brian Westbrook is still banged up (unfortunately for us, McNabb has made a career of dropping 75, 85, 100 yds rushing on us himself).

It is amazing what can happen in thirty-eight minutes.