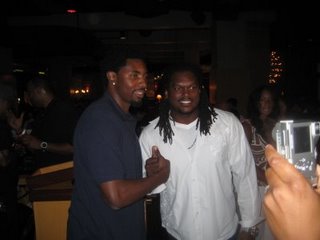 Not sure where to start on this. Oh, I know. The guest list. The website conveniently changed. When I bought my ticket..this was the guest list:
Wizards players
Brendan Haywood, Etan Thomas, DeShawn Stevenson, Gil, and Twan

Other invited guests include
Alonzo Mourning and Jalen Rose

OK...trivia...who didn't show? If you answered EVERYBODY...then you were correct. Carmelo has been in Beijing for a week. I am still baffled to how Mayor Fenty no-showed...he must have been hanging with Marion Barry. Brendan Haywood? Come on. You should be in town practicing.

I asked Etan if he received the massive "Get Well" cards that the Wiz put out on the concourse last year for all the fans to sign. He laughed and said he did. I mentioned if he remembered my note where I wrote (to my defense I was hammered and it was early in the season) "Get well soon...please don't leave us with just Brenda." He laughed. I asked him his thoughts on how JaVale McGee was coming along and he had nothing but amazing things to say. Of course he's going to give a positive response but he truly seemed sincere the kid has skills.

I talked to Blatche for a bit. I mentioned being disappointed the Wiz didn't make a run at Elton Brand and he quickly replied "That means I'm out of a job." Fair enough...but make a damn a 5 footer! I asked AB if Nick and Dom were still living with Gil and he mentioned Dom is living near him and that it's just Nick with Gil. That's definitely a good thing considering all of their maturity levels.

With the party being at Lucky Strike, I got to bowl with Blatche and Lavar. As Blatche and I were eyeing each other about to roll...I said "$100 a pin right". which I thought was creative...and he replied, "Already heard that." Dammit. I bowled the ball between my legs and landed about 7 pins daring him to match...he tried to match my between the leg bowl but it was not good. Yeah, I'm a rockstar.

Talking with Roger, he plans to stay in DC during the offseason and holidays. I asked him if I could rent his house while he was in San Antonio, but no dice on that one. I could have really taken advantage of that rap studio in there.