Nothing Secret about Gilbert Coming Back

Share All sharing options for: Nothing Secret about Gilbert Coming Back 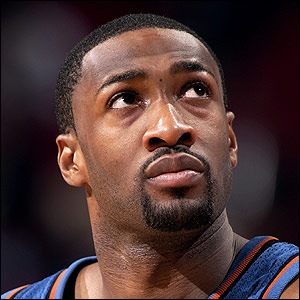 Of course Gilbert is coming back to the Wizards. Nobody can offer him what the Wizards can: the most money, the most freedom, the most love. We love him for who he is and ignore the blaringly obvious deficiencies/abnormalities in his game (lack of defense, ball dominance, shoot-first point guard). He is free to dominate the ball on offense but with the emergence of Caron Butler as the heart and soul of the Wizards, an evolution will need to occur in Gilbert's game and I don't think there is any reason to expect he won't accept it. Just as Tiger Woods will need to at least consider changing his style somewhat before returning next season to preserve his body, legacy, and longevity in the game of golf, Gilbert Arenas will need to at least consider adopting a varying style in his own game to preserve not only his own longevity and legacy in The Phone Booth, but to transform the Wizards from a perennial threat to almost win a playoff series to a perennial threat to make it to the conference finals. The pairing of a healthy Gilbert and a healthy Caron is enough to inspire that kind of threat. The role players surrounding the two of them should be able to pitch in what is necessary to win a game here and there -- Nick Young is capable of dropping in 25-30 points in one night, Andray Blatche is capable of 15 pts, 10 rebounds in one night, and Dom Corleone (the Godfather of Hustle) and Darius Songaila are capable of polishing enough offensive and defensive glass in one night to secure a win. These things don't have to happen in the same game...but they will need to happen with enough frequency that all the pressure doesn't continue to fall on Caron and Gilbert every single night.

"What about Twan," you must be thinking? Am I the only one who has this sinking feeling he ain't coming back? Do we want him back, even need him back? Yeah, we do. Even if he starts to dip from a production standpoint, his leadership in the locker room and maturity on the court are needed more now than ever as we try and bring along the likes of Blatche, Young, and Maguire. I am not sure if Butler can fill that role, or even if he wants to fill that role but he may have to, since I am sure Gilbert neither wants to nor has the current maturity to fill that role.

When Gilbert said he would take less money to stay with the Wiz as long as they took care of Twan first, it was a classy move on Gil's part. Acting as his own agent, he offered a team-first attitude with regard to his contract that was at least on its face rather refreshing. And it is not like Twan doesn't want to come back or that we won't make him a fair and reasonable offer to stay. But we know he is interested in retiring down in the Carolina area, and he has stated his desire to finish his basketball-playing days down there. This may very well not be the contract he retires on, so we may get lucky and land him here for 2-3 years before he puts in a 1-2 year stint on the Bobcats' roster. In the back of my mind though, I envision Jamison telling Gilbert to play in DC without him, to take over this team with Caron and get to the next level. In a sign-and-trade, we could get a pretty solid player from Carolina's stocked roster to build on. Throw in Stevenson and make a run at Okafor. Throw in Pecherov too if it helped. One hang-up of course would be that the Bobcats are run by a certain former Wizard who may be unwilling to do anything to help out our franchise -- Michael Jordan. On the other hand, he has a history of making moves for Tar Heels, and Jamison is a stud Tar Heel that would not only put fans in the stands, but produce on the court.

Whether we already have a secret deal with Gilbert in place doesn't matter. His future is inextricably tied to the Wizards' franchise. He became an elite NBA player here. He became an elite NBA personality here. He accomplished both by embracing the fan base here and using it to catapult him into the hearts of NBA fans everywhere. Some players feed on hate to bring out their best. Gilbert feeds on love...he needed to be loved the way we love him in DC to be successful. Even if certain few cities' fans around the country don't follow his every move with the same adoration as we do, his identity on the NBA landscape is very much equated with the way his fans love him, not the way a select few fans hate on him. Add to that the European tour the Wizards embark on next year and the NBA's willingness to make him top billing and there is simply nothing secret about him coming back.

The NBA draft is Thursday night. Any ideas on what Ernie Grunfeld is going to do?