I Feel the Need...the Need for GREED!

Share All sharing options for: I Feel the Need...the Need for GREED! 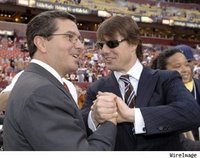 Let's not spend too much time trying to figure out all the ramifications of the current labor crisis in the NFL. Everyone involved is currently making a ton of money, and no matter the outcome, everyone will continue to make godless, sinful amounts of money. Let's instead look at how a possible uncapped year would and should benefit a team that has done nothing but mortgage future salary cap space for immediate marginal benefits -- the Washington Redskins.

Show Me the Money
For years now, Danny has written gigantic checks to bring in free agents and continually re-negotiated those large contracts to push off salary obligations into future years to create space now to sign more lucrative free agent deals. This has resulted in the Redskins being perilously close to or over the cap each year, and has hamstrung the team at times when it has perhaps identified a need that it could not address in free agency because, well, you just can't sign everyone to $35 million deals.

Risky Business
The term "salary cap hell" or "salary cap jail" has been bandied about for the last few years as everyone assumed that the check would come due and this team would implode due to the lack of fiscal responsibility the front office has shown. I mean, you can only sign, not play and then cut so many guys like Brandon Lloyd before you get screwed in the end right? You can only take so many $9 million hits from jettisoning guys like Lav Coles before it all catches up to you right? How many guys can you give $8 million checks to who retire less than 12 months later (thanks Deion) before someone says, "Ummmmmmmm...as of right now, we can only afford 39 players at 9 bucks each. And how did Albert Belle get on your payroll?"

Enter the current collective bargaining conundrum. In 2010, there will be an uncapped year. Even before you start wondering how Danny will keep himself from re-signing Jeff George for $25 million, remember that the rules will change to keep almost all the premier talent off the free agent market. If anyone gets overpaid, it will be a bunch of middle-tier talent -- don't get me wrong, we will overpay for some middle-tier talent. But it also will give the Redskins a chance to clear ALL of the mess they have created the last 5-7 years or so.

All the Right Moves
First things first...so there is a player on your roster like Brandon Lloyd you can't cut because it would cost you too much salary cap hit? Cut him in 2009, book the charge in 2010. Doesn't help us today with the Brandond Lloyd situation, but there is always another B Lloyd waiting to happen in this league. We won't be held hostage to those guys.

Eyes Wide Shut
All those contract re-negotiations where we turn riduculously high salaries into bonuses paid out over future years? No need...we can afford the high salary in 2010. So we just need to weather the re-negotiations one more season, pushing as much of next year's cap space out as possible. Thank God! We were going to do that anyway.

Then, for every vested vet (which is a player in the league with four or more years of service) whose deal we would traditionally rework, we cut him...and resign him immediately. All the cap charges we would have tried to push into future years would all come crashing down on....2010. Danny has essentially given these guys their bonus checks already (unlike other owners who pay them out as they amortize). So he would just be accelerating the damage to future salary caps to the year with NO salary cap. BRILLIANT! They would still come back into the fold with decent salaries, but they could be reasonable salaries, no-frill salaries...gasp!...responsible salaries.

A Few Good Men
I realize there would still be a few players who would be in the books with high salaries that we could not cut due to too few years of service or due to an overzealous agent we could not trust, but let's face it: enough of our high-priced players are swimming in dough thanks to Danny and would/should be willing to work with him to alleviate some future payroll problems.

Burgundy and Gold...The Color of Money
Maybe the salary cap never comes back. Maybe all the owners get naked at a bonfire and promise each other to only spend $25 per player from now on. But the fact is, this creates a one-time opportunity to expel the demons of past stupidity, even if only to create room for future stupidity. And not every owner can pull it off. The ones who dangle the bonus money on a string each year would have to pony it all up at once and some owners are simply unable or unwilling to take that kind of a cash hit in one year. Danny Snyder craps that kind of cash.

Mission Impossible?
I would be interested to hear what folks out there think. I can't be the only one to have thought of this. And before you write to tell me this can't happen, know that we at The Inquirer presented the question of "Is this possible" to a guy with 22 years of NFL experience, including jobs with the Broncos, Raiders, Browns, Eagles, and 49ers. He assures us it is absolutely possible.

P.S. Has anyone else seen this link to soccer wives and girlfriends? Let's just say I am glad I have this information now as opposed to in 30 years from now so I can dedicate my life to soccer. I gave up breast-feeding when I was 6 months old, but this list could knock me off the wagon for sure. YEGADS man!