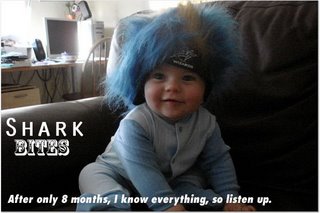 Ahern has added a 3rd writer aka 'Shark' who will be doing a weekly editiorial piece on whatever he feels like. He has been a force for Ahern in our content and feel it is only fair to let him share in the spotlight. Enjoy.

I may not know much about the world yet, but I know this: the Wizards should package their 1st round pick (#18), Brendan Haywood and Deshawn Stevenson, and go after the best big man/rebounder they can get. Would the Heat consider trading Beasley for that package? Would the Bobcats consider trading Okafor for that package? Haywood will give you the best effort imaginable since it is a contract year for him. Stevenson is playing under an extremely affordable contract that is very tradeable.

Granted, there will surely be a very talented player available at #18. Too bad we are not one very talented player away from having a dangerous roster. We need to give Caron Butler (the heart of this team now) all the help we can and Haywood simply does not fit on a Caron Butler-led team. We need a pounder, a big man who plays better defense, a center who doesn't insist on DRIBBLING UNDER THE BASKET! I blew breast milk out of my nose on more than one occasion as I witnessed that 7-footer try and put the ball on the ground only to either bounce it off his foot or get it stolen.

Arenas, Jamison, Blatche, Young, McGuire, and Songaila are all strong contributors and good teammates for Caron. Stevenson has to go though...he's worn out his welcome. I have grown more attached to my poop-filled diapers than I am to this guy. Deshawn is the kind of player who will have a job in this league for the next 7-10 years. If I turn 7 years old and he is still a Wizard, I will be more pissed than when I crapped my diaper on the way into church and had to sit in it for the next 2 hours (yes, it was Palm Sunday mass).

Quick Hitters:
No matter what they say, that was DEFINITELY a foul by Derek Fisher at the end of Spurs/Lakers Game 4 the other night, that DEFINITELY should NOT have been called. It was clear as day that Derek made contact with Brent Barry when he jumped and came down onhis arm like that, which is the definition of a foul. Maybe Brent's mistake was not hitting the floor on the contact like Timmy and Manu do so well. So I liked the no-call close call at the end of the game. It is time for the Spurs to suck again and David Stern is seeing to it like we predicted.