OK...so a hardcore sports rivalry has not yet fully materialized, but the fact of the matter is that there is enough fanaticism for local teams in both D.C. and Baltimore to envision a time in the not-too-distant future where one will exist. This inevitability has caused this writer to wonder: better sports town -- DC or Balmer? We are going to make some pretty hard decisions in the words and days to follow. Let me know how far off you think I am. And for those of you who are already saying, "You can't compare those two things"...save it. I can. And I did. In the first part of our hard-hitting series, we examine a few of the stadiums that have been dear to the respective city's residents over the years. 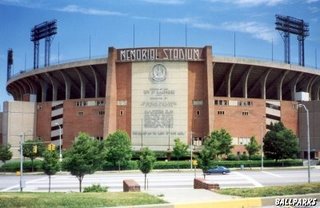 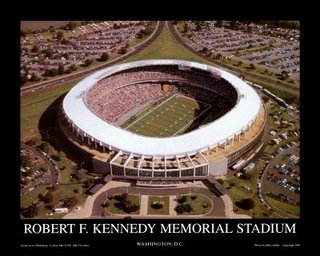 Old School Stadiums: Memorial Stadium vs RFK
Nestled on 33rd street, with a downtown yet still neighborhood kind of flavor, Memorial Stadium was a hell of a place to get to go to as a kid. I remember sitting with my back to the brick wall on the top row behind home plate watching the likes of Eddie Murray, Mike Flanagan, Jim Palmer, Rick Dempsey, and of course the Ripken family. As a structure, it wasn't the prettiest and the bench seats were hard to sit on for hours on end. No, it was what happened inside the confines that made Memorial Stadium the place it was. Rex Barney giving fans contracts (did you know he pitched a no-hitter for the Brooklyn Dodgers in 1943), Earl Weaver getting in the umpires' faces, Rick Dempsey sliding across the tarp during rain delays, and of course, The Oriole Way. I always remember walking to and from the stadium as a small kid thinking that the folks who lived literally next-door to the stadium must be millionaires since I could not imagine any other way to secure such a sweet spot. Summer nights at Memorial Stadium were religious experiences for a kid who got maybe 1 or 2 of them per year.
RFK Stadium was another example of a magical destination that -- to most Redskins fans -- was more spiritual than the trip they made to church earlier that day or weekend. For me it was the Joe Gibbs era I got to witness first-hand, getting to go to maybe a handful of games as a young kid, before securing a job as a soft-pretzel vendor in high school. The stadium drew on the mystique of the Gibbs-led teams, but it had some flair of its own. The lid around the rim of the stadium had a way of funneling the sound back down around the field and fans. And let's not forget the bouncing section of seats, causing everyone in the stadium to wonder if the place was going crumble apart at any moment. The neighborhood along Benning Road may not have the Charm that Baltimore boasts, but it was/is D.C's stadium and the aura of urban life in the nation's capital has always been inescapable in and around RFK. Summer nights, orange tee-shirts, and O's caps were to Memorial Stadium what cold, wintry Sundays, 4 layers of clothes, and burgundy and gold knit hats with the little half burgundy/half gold puff on the top were to RFK. Though I am a far greater Redskins fan than Orioles fan, I can not distinguish between those great Orioles teams under Earl and those great Redskins' squads under Joe Gibbs. As a stadium though, RFK seemed to have a way of communicating that Memorial Stadium did not. The bouncing seats and deafening roar gave the stadium a voice that intimidated opposing teams for decades.
Edge: RFK 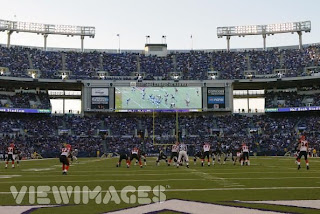 New Stadiums: Fedex Field vs M&T Bank Stadium
Disclaimer: Fedex Field is my home away from home. As much as any great homesteader in America's Manifest Destiny era did, I have claimed the area around F21 as my own personal land. Over the years a tailgate has developed, and it can honestly be said that the last tailgate of this past season was the greatest so far in a long line of increasingly great tailgates. I know the folks in my section because I have sat with them for 8 years now, and I know the folks in my section of the parking lot because they too have kept in constant pursuit of an ever-improving tailgate -- F21 called out to more than just me, and don't think we didn't all appreciate the seeming coincidence of the number given the year's tragic loss. Can I possibly be impartial in this category?
I have been to maybe 5 games at M&T, including a playoff game against the Titans about 3 years ago -- all with a group of guys who made an annual trek to the parking lot underneath I-95 to chug Jaeger-bombs and stumble into games by the 2nd quarter. The stadium is simply amazing. Where Fedex looms large as a hulking concrete giant along the capital beltway, M&T stands as a friendly, inviting structure as you enter into the city from the highway, a beautiful companion to Camden Yards that completes the view as you pan from the B&O warehouse to the 95 overpass. If you don't want to tailgate underneath a major interstate, there are the bars in Federal Hill, and of course Cross Street Market as well as.....a thousand corner bars in between and around all within walking distance. On the inside, the unavoidable video screens make this Redskins fan wonder which team boasts the bigger balance sheet -- we might as well have 13-inch screens in each endzone! The old-school Jumbotron/Diamondvision/awfulness at Fedex is a DISGRACE! Players racing down the sidelines in Baltimore for a score actually look up at the screen(s) to see how close defenders are to catching them! Players at Fedex look in that direction and they see a Budweiser sign. Seriously, what gives Danny?
Fedex packs more folks in, but I have sat in the farthest seat away from the action in both M&T and Fedex. Let's just say the difference in views is undeniable. The crowd noise is louder in Fedex on account of the extra bodies, which is very important to me. But M&T does not follow that far behind in this category. Snyder has done much to improve the utilitarian block of cement that Jack Kent Cooke paid to have built overnight, but M&T had Charm and flavor from conception. And those screens just do it for me.
Shocking edge: M&T