Nobody Beats the Wiz ... (OK, everyone does)

Share All sharing options for: Nobody Beats the Wiz ... (OK, everyone does) 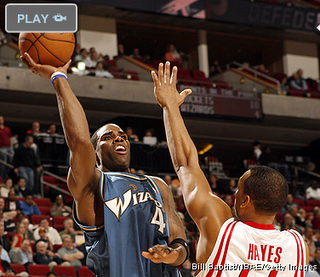 So after watching the Wiz/Rockets game last night, it's pretty clear we're a mess. Now, we are coming off 4 games in 5 days...so I guess we can't take this performance as a true test. What disheartended me was the total lack of quality shots. Look at the picture above, that is not exactly a play Eddie would draw up and there has to be a better shot than this. Not only that, we made Dikembe look as if he was 25 years old and his prime. I wanted to throw the TV out the window everytime he waved that 4-foot finger. The only highlight of the night was when Dikembe got T'd up for doing it in Blatche's face.

The most notable stat of the night was that the Wiz continued their streak of being the top of every else's franchise record stats. We only scored 23 points in the first half. This tied the franchise record for the Rockets for the lowest by an opponent (and Yao didn't even play).

Watching the game, it reminded me a lot of when a 7 year-old plays against their 16 year-old brother. Lots of awkward shots, blocks, and just being out-hussled with ease. On one fast break, AD and Jamison ran into each other and AD missed the layup. I guess it's better to forget this night and move on. After all, it's Phil and Steve Bobblehead night in a month. The question is, will we still be in the playoff hunt by then? With the East, yes, anything is possible. Not without Caron though.