Todd Collins Campaign Run is Over

Share All sharing options for: Todd Collins Campaign Run is Over 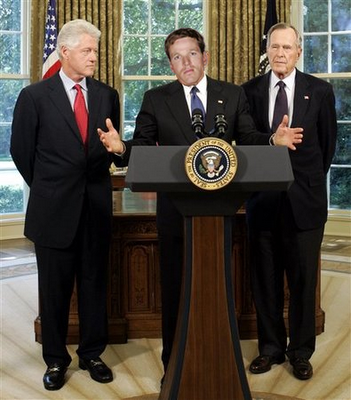 Inside sources to the Inquirer revealed that Todd Collins planned to use his current string of victories with the Redskins (and planned Super Bowl victory) to announce his run for the U.S. presidency in 2008. He had tentatively scheduled a live on-air appearance with Sally Jesse Raphael with the Lombardi trophy to announce his run.

While riding the pine all these years, he has been taking bar exams and studying foreign policy. He figured by winning every heart in DC with a Super Bowl, he would certainly gain a massive number of votes. This all fell to shit with his abysmal performance in Seattle, spending more time on his back than Paris Hilton and throwing lob balls out to centerfield, that even Splenda could laugh at. And we've all seen Ken throw a deep ball--if he can laugh at those throws, then they were truly bad.

Todd has taken a tumble in polls since the weekend, and he was reportedly linked to "Ray Finkle" graffiti vandalism in Suisham's hotel room. After getting to sit at the big boy table for a month, I'm not sure he's going to be happy riding the pine again, but it would seem he is not destined to enter training camp as our starter next year. Thoughts? Is this the last we have seen of TC?

Side note: If you have not read Gilbert's latest blog on New Years resolutions, you really do need to read it. It's actually pretty deep, although Rick Cannon would tear his grammar to pieces.