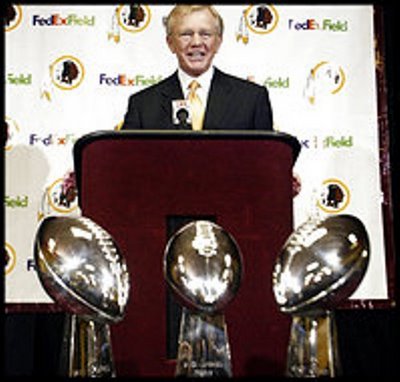 OK.
So Gibbs didn't get to the Super Bowl in the last four years. He did, however, coach in the game four times. The three trophies won during those trips stand as a testament to his ability as a professional head coach.
When he came back, he inherited a team that wasn't in a place that deserved to be judging itself on championships. The Washington franchise was a joke. The "program" was a joke. Spurrier walked out on the job and this team, and he was the guy we turned down Marty to get! Champ Bailey was fed up with all of it and had to leave for his own sanity. Remember those days? Makes you want to punch yourself in the balls doesn't it? Up is down, down is up, Bruce Smith is still good, Jeff George is the answer, Wuerffel can play at this level, why not hire an ex-Cowboys coach, Deion gets paid in cash...up front...for one good punt return.
Holy Crap.
Now the Redskins are a team that has made the playoffs 2 of the last 3 years. Up-and-coming. Young QB. Running back in his prime. Young defense playing with a ton of heart. It is hard not to credit Gibbs with just about most of all of that.
Yet the biggest games he coached in were of course the Super Bowls. His average for making it to the Super Bowl was one in every three years--his recent, championshipless return dropped his average visit to the Super Bowl to once every four years. Not too shabby.
His teams won games in those Super Bowls in ways that remind us of how his team looked this year. Against the Dolphins, they made a big play late in the game that decided it when Riggins took it to the house on 4th down. Against the Bills, they managed the clock and took shots with Rypien to come out on top of a game the Bills almost climbed back into. Against the Broncos, they had the shakiest start in Super Bowl History, going down 10 points in the 1st quarter--a 10-0 score that to that point no Super Bowl team had ever overcome. Against the Raiders, they looked like they did this year when we played the Patriots--overmatched in most aspects of the game. And his ability to win big games against good teams with different quarterbacks has been uncanny.
Even given all the drama that surrounded this season, looking back, I still think it has to be the rings that define this coach. There is another coach still out there who knows a little something about rings. But Belichick is no Joe Gibbs. I happen to believe that the Jacksonville Jaguars have what it takes to knock the Patriots off of their pedestal this week. It will be a win they ride all the way to the Super Bowl this year (courtesy of our friends at Ticket of America), only to lose to the Green Bay Packers.
To repeat an earlier sentiment of The Inquirer, we are better off now than we were four years earlier. Despite not making it back to the Super Bowl during this last run, our team is closer to compiling a contender now than it was when Gibbs came back here in 2003.
We have the luxury of raising our expectations for this team above "laughing stock of the league", and thanks a to man who knows exactly what it takes to win championships, we stand infinitely closer to playing in a Super Bowl today than prior to his return.