And the new head coach for the Skins is .... Dan Snyder!

Share All sharing options for: And the new head coach for the Skins is .... Dan Snyder! 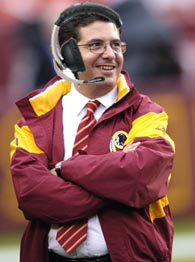 So really, does it matter who the Skins hire as their new coach? Dan Snyder basically has the headset on in the owners box. Bringing Gibbs back gave us all a big sigh of relief that Snyder finally handed the reins over and ended his Jerry Jones/Mark Cuban style of running a franchise. Now that Gibbs is gone, Snyder can probably say I would have done this and that differently and achieved better results. We all know that he will NEVER hire a coach that has full control over draft picks and personnel. Snyder is certainly back in control now, and it is scary.

Rock Cartwright - It's pretty clear we need to resign Rock. He is the golden boy on special teams, I like him as a 3rd stringer RB, and well, his mohawk.

Derrick Frost - Ranked 21st in punting. He has a hot wife, but I don't care. She's going to dump him when we cut him. Seriously, we cannot get any worse, and he cannot stick ANYTHING inside the 10. He'd make Gregg Williams job so much easier if he was decent. Seriously, anyone disagree that a punter is not worth re-signing unless he's in the top ten? Bring Reggie Roby back.

Shaun Suisham - Tough one. He cost us that game in Seattle and from what we know now, we would have had a decent chance in Dallas. Even if we had got blown out in Green Bay, it would have been a spectacular year. Thanks for nothing Suisham. Having said that, he's young, he's decent. I'm not ready to make another David Akers mistake and cut him just yet. Sign him for a modest amount if we can.

Mark Brunell - Now, he's thinking about retirement but he's huge cap hit either way. I have no problems with him holding a clip board and mentoring, we're already paying for it. I think Snyder built a handicapped bathroom for him at Redskins Park, so we might as well keep him around.

Todd Collins - Tough call. He obviously has the smell for being a starter and now that his menstrual clock is ticking at 36 years old, I doubt he wants to play backup. It all depends what happens to Al Saunders. I think if he stays, so does Todd Collins. A lot of Skins fans want Al gone, but that will only mean our whole team has to learn another new playback from scratch. Keep Al, keep TC, next.

Pierson Prioleau - Of course we all want him to stay. Solid special teamer and backup safety. Not sure what his salary would fetch but I can't imagine many people out of the NFC East have even heard his name. Sign him quick.

Jason Fabini (OL) - He was huge for us went R. Thomas and Jansen went down, and the way the last 2 years have been, we need to assume it will happen again. Good players that know our system are huge. We built some solid comradry this season and we need to keep it together.

Non-notables - Reche Caldwell and Keenan McKardell. Cut 'em, they'll still be available week 9 when we need them. We can sign them then.