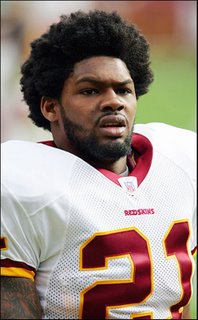 People sure do see a lot of things when they look at this picture. Some see a hairdo. Some see a skin color. Some see a tattoo. Some see a football player. Look again though. It's a picture of a proud new father. It's a picture of a beloved son. It's the picture of the love of someone's life. It's the picture of a hero (see below.)
I have had this picture on my screensaver at work for a long time now. The occasional comment from a co-worker would invariably spark the debate of Sean Taylor's "off-the-field" problems. Sure he skipped an important business meeting (rookie symposium), got pulled over for allegedly driving under the influence, and he has displayed at times a less than pleasant disposition on the field (spitting on Pittman)...but these are the same kinds of headlines we gobble up everyday on E! News, Access Hollywood, TMZ, etc. Sean Taylor was just a big, mean, black football player, so it wasn't as cute to people (nor should it have been) as when Lindsay Lohan or Britney Spears did these same kinds of things both in public and at their workplaces . His journey to the edge of jail-time and back on the word of known criminals and tried by a self-advertising, DJ-wannabe prosecutor did serious damage to his reputation. One thing he figured out was how to stay out of the media--altogether. He ran from the media to protect his privacy. And in the absence of his voice, people were more than happy to assume he was a bad guy and that there must be foul play at all turns with a guy like this. It was an easy story to tell. It was an easy story to believe for some people with a single glance at this picture.


Sean Taylor had to grow up real fast it seemed. Faster than most of us had to probably. He has for some time represented an individual worthy of admiration by the young fans coming to the ballpark to see him, both as a player and as a person. He worked harder at his chosen profession and understood what his role was in fulfilling his potential, as evidenced by his study habits and practice effort. He was a good man. If you think that his radio silence to the media and disappearing act outside of football prevent me from being able to call him a good man, I think the same things prevent anyone from saying he was a bad man. Except my argument has evidence of a guy who was only 24 and had already figured out a lot. And I can show you a guy who had impacted so many lives positively on and off the field--which we know to be true given the stories told these days.

When I see this picture, I always think of why I go to the games on Sunday. Television brings you the games from around the country in nice, neat packages into your living room. But something about watching a guy like Sean Taylor live made it worth having a seat at the game every week. He was our best player. On our entire roster, Sean Taylor was the BEST REDSKIN. Not only that but he was going to be our best player for a long time. Seeing this picture throughout the year and certainly throughout the offseason always made me feel good about the prospects of our upcoming year, or upcoming game. Any defense that had Sean Taylor on it had a chance to win. Period.

I did not know the man personally. He had an impact on me though to be sure. He was my favorite player; he was ebagg's favorite player. He was ours to defend against the fans of every other team year-round. He was ours to defend against even other Redskin fans who were concerned we had a "bad apple" in the bucket. He never did anything to deserve what happened to him in his home that night, when he was clearly defending his family against intruders, standing between gun-wielding criminals and his fiance and baby. When is Michael Wilbon going to write the article calling him a hero instead of the one he wrote basically blaming Sean Taylor? If he hadn't been there with them, unspeakable harm could have been visited upon his baby and fiance. If people want to constantly make Sean Taylor out to be the sum product of his few public missteps as they have been doing for so long now, perhaps they should consider his most recent action that was made public. In the moment that I believe defines the kind of man he was, he stood between his family and two bullets.