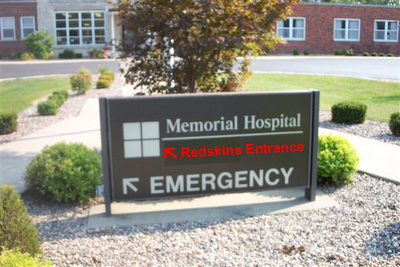 OK, not really but we're close to that. So the Skins are the worst conditioned team in the NFL. It started with Jon Jansen week 1 and its never stopped:

All I have to say is that this is not 'bad luck'. Sure, you do have the freak accidents like Carlos Rogers and S. Dot, but as a matter of fact these players are not conditioned. That's the only way to explain the chronic hamstrings and cramps. It also explains why we continually blow leads in the second halves of games.

Not only that, quick, try to think of a HEALTHY Redskin that is under the age of 30.....come on, you can do it, no, not Suisham or Frost, another one. OK, Chris Samuels and Cooley, although he is now banged up which is concerning. Seriously, why is it when one player goes down, our team is a mess? You can look at the Pats, who faced their run of CRUSHING injuries in the secondary...and that was the year they went to and won the Super Bowl. Troy Brown was playing corner in the Super Bowl!! So that to me raises two red flags, 1) we have no youth on our squad, and 2) bad coaching. The two are actually VERY related because the coaches traded away so many draft picks for horrible free agents. The good news is we are absolutely SCREWED with the salary cap the next 2 years even with it jumping up 10+ million. Seriously, I think we should just let Los Angeles have the Skins and we can start fresh. The new team...how about the "Washington Snipers"...hmm, no. The "Gimps"..."Downsies"? The only way I could support a team this bad is if they had the suffix 'Bullets'.

PS - On a side note. Why do great, scrambling quarterbacks NEVER wear knee pads? Vince Young...nope. Jason Campbell...nope. From what I read, the helmet that hit JC's knee was almost straight on...hmm...right where some padding should have been. I played hockey with MASSIVE knee pads and my mobility was fine. What is the difference..just wear them!! Steve Young did, Brett Favre does...it matters!! Jesus, I'm worked up again. Im Out. Wilbon, if you're reading this, why don't you write an article about how African Americans with thug backgrounds don't wear knee pads. Sean Taylor didn't, Carlos Rogers didn't and look what happened to them. It had to be from their criminal past that caused that. OK, Im clearly stretching my point now but Wilbon crossed the line last week and wrote a stereotypical article against blacks from himself. To quote an eloquently spoken blog I read:

The trouble with Wilbon is he uses the sports column to make comments and inferences about circumstances outside of the game that he doesn't fully comprehend.

As it turns out Taylor's demise had nothing to do with any 'street grievances' or 'payback' from guys he met while at the U.

It was rather Taylor's generosity to his sister and his family in letting them use his house and invite friends into his compound that seemingly caused a couple of these idiots to hatch a plan to rob him.

Wilbon is guilty of doing what he claims the 'white' media does all the time, namely stereotype the athlete of color.