I Wish There Was Laws Against Assh*les Like These!

MAJOR UPDATES AND DRAMA WITH THIS POST...read it all below. My ebay post is sadly is bringing the worst out in people. Check out Update2. 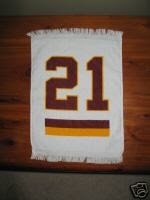 I am so pissed off I cannot even explain. I was unable to get a Sean Taylor commemorative towel during the Buffalo game, and I noticed they were selling them on Redskins.com for $3.99, where all the profits of course go to Sean Taylor's Memorial fund. As a quick 'why not?'...I checked Ebay and found something EXTREMELY disturbing. Scores of Ebay postings of people selling their 21 commemorative towels for over $10..some Buy it Now for $30 with special tags 'RIP' and real emotional stuff. ARE YOU F*CKING KIDDING ME?! This is a disgrace that society has sunk this low to profit off such an emotional time. We all know FedEx field is expensive. The fact that you can afford to be there, I seriously doubt an extra $15 makes a difference in your life where you need to step to this level.

For those out-of-town fans that attended the game who have no loyalties to the Redskins, you have NO excuse either. I hate Jeremy Shockey probably more than any player in the league, but if I was at Giants stadium for a similar ceremony (God forbid), I would have for sure given it away to someone who would want it more. At the least, I could post a craigslist ad saying 'Free commemorative towel' and snail mail it to a fan's house for $1. It’s called ‘doing something nice.’ Something we really cannot grasp unless it involves a guaranteed favor back.

To TRY and help combat these dicks, I paid to post an Ebay listing telling people to stop buying these towels from these scumbags...you can see that here.

Perhaps we all should email the ebay sellers telling them off...any thoughts on this people? This needs to stop.

UPDATE: Ok, so Steinberg already blogged this story. Dammit Ken, you've been offline quite awhile...you should have caught this. Anyway, the bids for the towels were over $100 the day of his funeral. SHAME.

UPDATE2: So I have received 3 replies to my ebay post. 2 thanking me, and well, the other...this:
<from: jonmeacham@comcast.net>
"YOU are the scumbag. A noble cause? Snyder gave his daughter $500K. Sean Taylor was my favorite player, but dont hate on people trying to make a buck for themselves. Oh yeah, redskins.com is out of them you douchebag. Get a life - pot_king"

Now, how I am suppose to respond to this? NEVER stooping to his level...here was my rather calm response:

"How is Redskins.com out of them if I bought one today? The hostility in your reply proves your personality and the greed of the ebay sellers. I was a Sean Taylor fan more than anybody and the fact that you encourage it proves your ignorance. Notice how I don't take the trashy response route like you. Yes. Dan Snyder STARTED with $500K...AND all profits from S. Dot's jerseys, which are MASSIVE if you haven't noticed. The fact you took time out of your life to reply to my good will post is more saddening than anything. No Sean Taylor fan or humane person would ever respond like this. Please, stop talking. You are only embarrassing yourself more."

I dont know who you are but,I want to say THANK YOU!I too am disgusted by what I see on ebay.I went to the game and I was moved to tears during the opening tribute.But, when I went to look for a jersey on ebay (our area sold out)I saw those towels and my heart just dropped!My towel was taken off my shoulder after the game and the guard saw me searching and handed me another.It means something to me.Too bad these jerks dont get it.Again Thanks!