Unwatchable. Unforgiveable. I am done with the Redskins.

Share All sharing options for: Unwatchable. Unforgiveable. I am done with the Redskins. 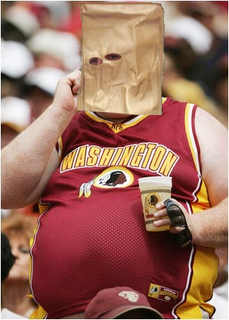 Where do I even start with the Redskins/Eagles game? Oh I know, I am never watching another Skins game again. PERIOD. (sorry, bolding a period does not set the tone to how pissed off I am). Cowboys/Skins next week, I will not be watching. I vow never to watch another game until Saunders and Gibbs are both gone.

First things first. Who runs the ball on 3rd and goal from the 8 yard line!?!? The only possible team that should call this play is the Chargers. Yeah, that is a not a compliment to Norv Turner. And, how many times do we have to watch McNabb scramble for a 1st on 3rd and 21? Especially now that he has 2 flat tires!

I was actually in Philly for the game and listened to their WFAN announcers before the game. To paraphrase, "The Redskins are terrible. They have no passing touchdowns to a WR. Every team has focused on the run (because that's Joe Gibbs football)...so if you want to stop the Redskins, focus on Portis and make Campbell beat you. They barely beat the Jets and Dolphins."
Tough to argue that. However, Campbell was doing just that. First half he was completing long passes and actually looked quite solid. So went wrong? Very simply, COACHING. We seem to be the only team that does not make half-time adjustments.

Yeah, I take to heart Philly talk radio commentary as much as I do Kornheiser's predictions in NASCAR, but it just goes to show how simple and predictable our Offense is. The one gadget play we run every 3 weeks always results in a disaster.

Someone needs to be held accountable for this loss. And I am sick and tired of Joe Gibb's "we fought real hard" and "we have lots to think about it and it all starts with me." F*** THAT. Joe, you are single-handedly losing games with your decisions. Running the ball. Burning timeouts. Last week it was challenging the spot of the ball on a run up in the middle (no one could see anything) and this time on the Betts fumble. Is your headset broken? Are you so senile that you can't understand English from teammates that the play is not clearly visible?

We need a blowup at the post-game podium. I'm talking Denny Green throwing the mic, I'm talking Mora "PLAYOFFS?!" Joe, you need to show and share the same frustration we have and that you give a shit. I have a strong feeling once Joe is gone players will only then reveal how screwed up this hierarchial chain of command is. Two coordinators that run the whole show and one senile mastermind that overrides when he feels like. Whoever called that run on 3rd and 8 needs to step down immediately.

And why is Jason Campbell not audibling? There was one third and short where BOTH safeties were in the box? What do we do, exactly what our tape from the last 7 weeks say...run up the middle. Outcome? STUFF. Punt it away.

I wanted to see at least 1 QB sneak in that situation. I feel like JC should be able to put his head down and get a couple yards almost any time he wants to do it. Especially when we are running no-huddle. But naturally, short-yardage situations this year have turned into 3rd and longs thanks to some timely penalties.

Which leads to my next question, if Belichick coached the Skins, would we have won that game? I'm pretty sure we would have. The Redskins CONTINUALLY make devastating penalties. How is this possible at week 8 AND AT HOME! The first drive of the game it was the illegal contact. So instead of a punt, the Birds get an automatic first and an eventaul TD. Then, the false start by Cooley on third and goal from the 3. How does this happen at home?!?? Inexcusable. Unforgiveable.

And why is it that substitute players bring NOTHING to the table? Once Sean Taylor went down, Pierson Prioleau got absolutely worked. We might as well have had Calvin Booth playing safety. On that crushing Westbrook score, Prioleau was running the wrong direction, and the only play he had to make was force Westbrook to the sideline. What does he do, run towards the sideline allowing Westbook to cut back open in the middle of the field. Does Prioleau attend the same practices as everyone else or he is being coached at Springbrook High? I am not expecting anyone to replace Sean Taylor, but you are in the NFL for a reason. At least play some fundamentals!

Our offensive line has been able to overcome injuries this year thankfully but as a team this is not working.

What is really disheartening is that the Skins right now are as good as they will get. We are not building anything. We have simply been treading water for the last 10 years. We've had some decent draft picks, but Dan Synder's will to continually buy over-priced fee agents to fill holes is a proven anti-pattern. I give Snyder props for bringing in Gibbs and handing the reins over, but enough is enough. If there's one free agent you sign, PLEASE let the next one be a General Manager. We all know you can afford the best, if not, just raise parking another $20 a car, which you'll probably do anyway. Once we have a GM, we can then input a MODERN day coach that is proven and players can trust in following.

For my part, I say to the Redskins entire coaching staff, "Thanks for nothing." I am focusing on the Wiz now. (*sigh*).