Share All sharing options for: Coincidence? Take a Closer Look 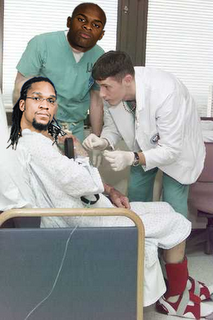 Brendan Haywood, at times this season, has been as dominating a center as we have had in some time. Averaging 9 points and 12 rebounds a game, he has been very active for the Wizards on defense and has been able to score in timely situations. With Etan out indefinitely, it seems rather timely that Brendan would step up and perform a little more to his potential. But wait...he played a lot better last year when Etan was hurt. In fact, after starting the first 20 games of the season, Etan got hurt and by the time Etan was ready to start practicing again, the Wizards were 8-1 with Haywood at center. He was averaging 9 points and 10 rebounds. Sound familiar? Don't get me wrong, I love the production we are getting from the center position right now, but it kind of sucks that Etan had to have open-heart surgery for Brendan to play well and with confidence. Why do I say that? Because I happen to know the history behind these two and I am in the unique position to shine some light on these facts.

In the third grade, Etan Thomas comes home from school early. He was sent home by the school nurse for a case of rampant lice in his hair. He missed 2 weeks of school and was almost held back an entire year because his cursive writing skills were so far behind the rest of the class. That same week a young Brendan Haywood comes home all smiles--he got the lead in his class' school play, Gulliver's Travels. Sure, his height had a lot to do with that, as he was already 6'3" by the time he was wrapping up grade school, but it was the way he came out of nowhere to land the gig. The school drama teacher noted on his final report card that, "All year long, I wanted more out of Brendan. Even though the rest of the class is white, he still did not do enough to win the lead roles in 'Shaft', 'Malcom X', or 'Ali'. But for some reason, that one week for 'Gulliver's Travels'...he was really on."

On the way to high school one morning, Etan was involved in a 5-car pile-up that resulted in severe casualties for him and those in his car. The freshman he was driving to school that morning was savagely sliced in half, while Etan suffered broken ribs, a broken leg, a concussion, and lost his right eye (which is of course why he has that glass eye to this very day). He was in a wheelchair for 2 weeks, and his high school sweetheart dumped him when his lack of depth perception (because of the glass eye) resulted in an unfortunate bedroom mishap. That very same month, an awkward Brendan Haywood, only 1 year younger than Etan, lost his virginity to the hottest girl in school. In a page torn out of that year's yearbook obtained by the Ahern Inquirer, a very telling note was penned from his classmate Todd "Whitey" Whittington: "Thank God you finally broke up with Patricia. Her moustache was scary, and her fake leg is not even the same length as her real leg. But nobody can take away that magical night with Amy "Booba" Lishus. How you pulled that off I will never know, but I can tell you this. You were in a kind of zone then that you have never seen since! P.S. Tough luck losing the leads in 'Ali', and 'Shaft' to me in grade school. You would have been great! (No way you could have touched Sean O'Flanagan's performance in 'Malcom X' though.)"

The last two seasons Haywood has all of a sudden shown up to play when Etan was out of the picture. This is MEGA-troubling. If I was Etan Thomas, I would watch out for any mysteriously tall, bald, headband-wearing nurses in his hospital room. Especially one with a bad Muhammad Ali impersonation.